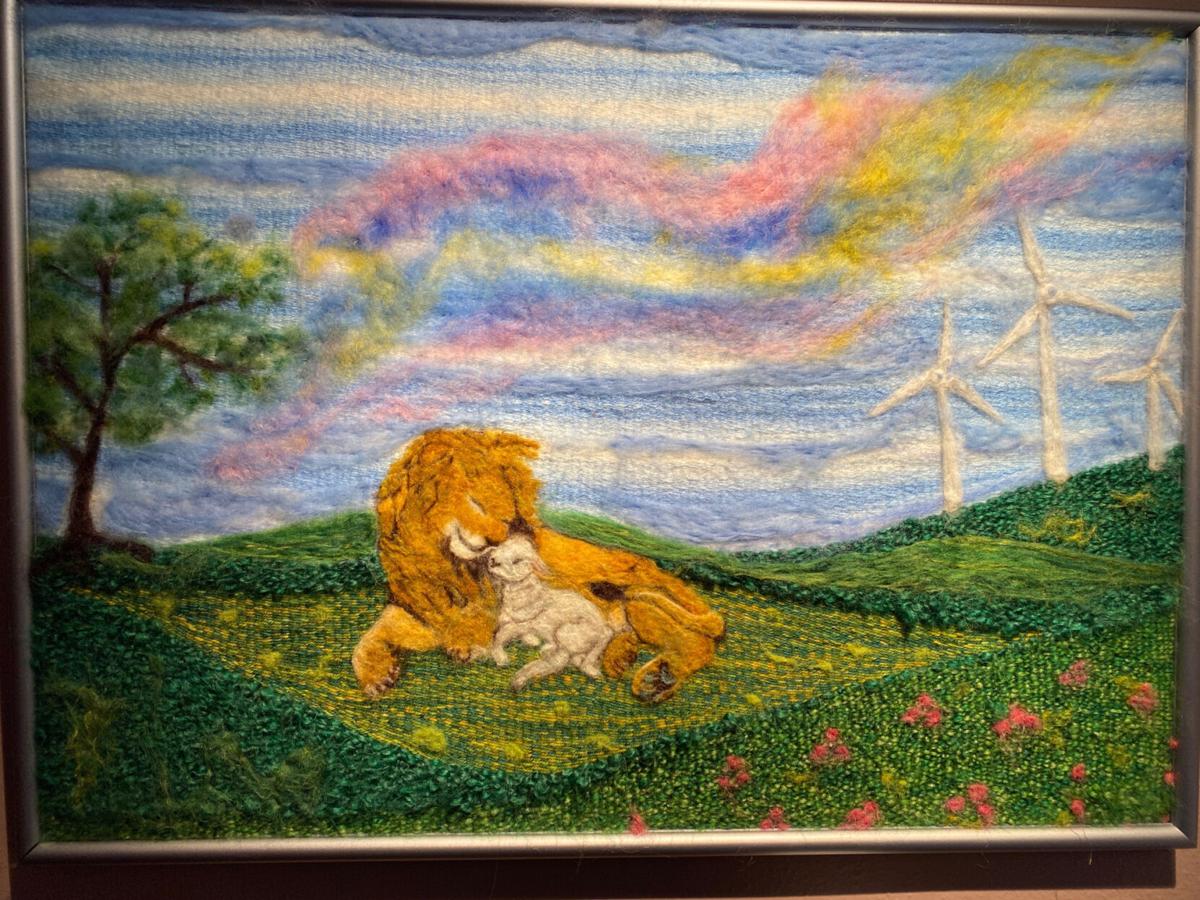 The Lion and the Lamb. A detail of the Paula Henry Peace Award winning artwork is pictured above. The aware is given jointly by GVCA and The Genesee Valley Citizens for Peace. The artist behind this year’s winning work was Josephine Konvinse. 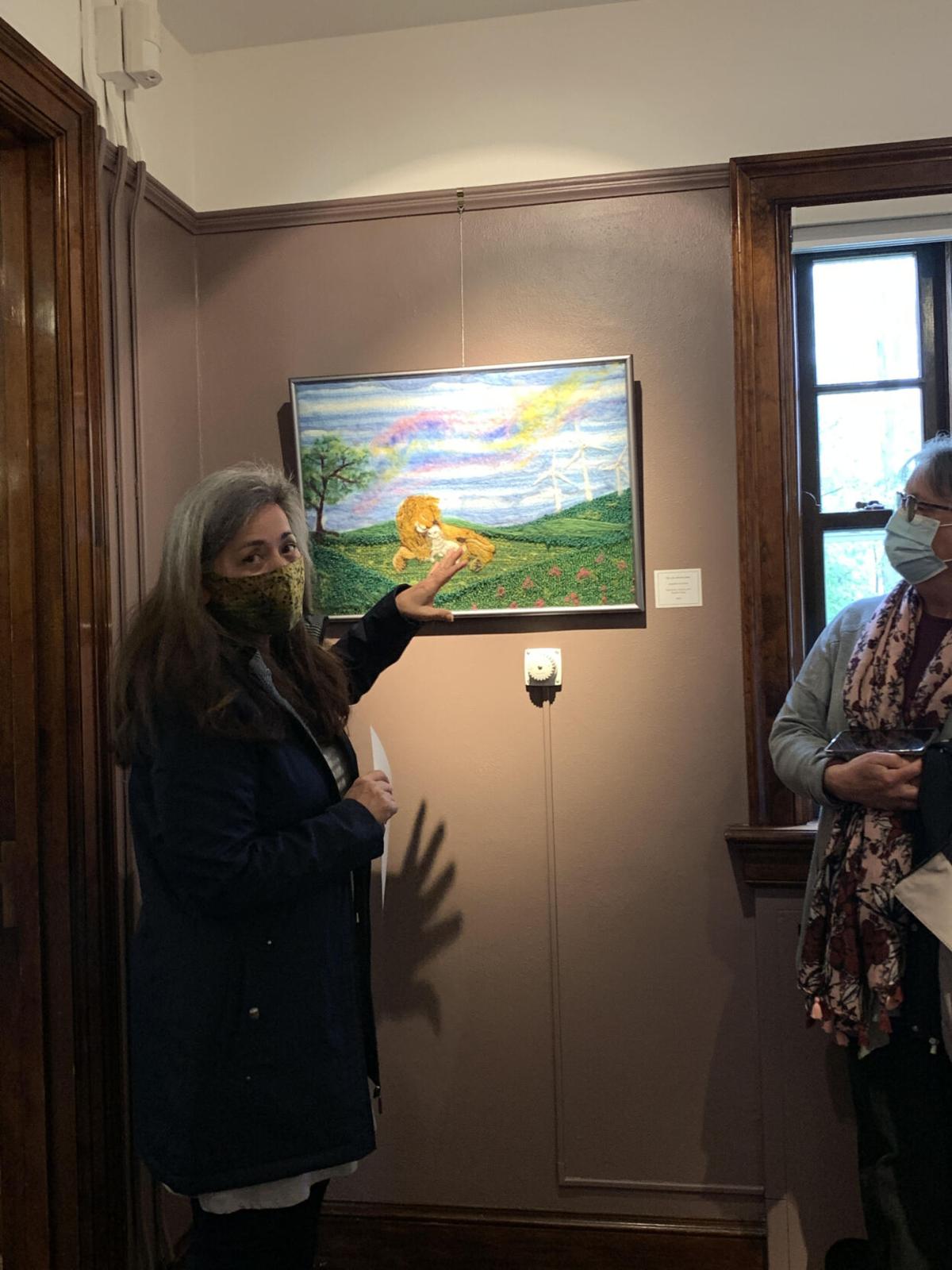 Photo courtesy of Genesee Valley Council on the Arts

The Lion and the Lamb. A detail of the Paula Henry Peace Award winning artwork is pictured above. The aware is given jointly by GVCA and The Genesee Valley Citizens for Peace. The artist behind this year’s winning work was Josephine Konvinse.

Photo courtesy of Genesee Valley Council on the Arts

The artist who created a colorful handwoven tapestry depicting a smiling lion and lamb was named the recipient of the 2021 Paula Henry Peace Award presented by the Genesee Valley Council on the Arts.

Josephine Konvinse accepted the award during the opening reception of the GVCA’s annual member show.

Konvinse’s piece, called “The Lion and the Lamb,” was called an excellent example of Paula’s belief in a world without war, nuclear weapons and militarism. The piece, handwoven tapestry and needle felting, featured the two animals snuggling under a rainbow breeze and gently turning wind turbines.

One of the judges felt the piece “makes a beautiful statement that renewable energy will eliminate wars over oil and acceptance of diversity will eliminate inter-personal conflicts.”

Unbeknownst to the judges, Konvinse met Henry years ago as a work study student at the SUNY Geneseo library where Henry was in charge of acquisitions. This time together sparked a lifelong friendship and planted the seed for Konvinse to become a librarian herself.

“We trust that Paula would be especially happy with this year’s honoree and her artwork,” said Deborah Bump, executive director of the GVCA.

The Paula Henry Peace Award, a collaboration between GVCA and the Genesee Valley Citizens for Peace, is presented to the artist whose piece most reflects the theme of world peace. The winning piece is selected by judges from both organizations.

Paula Henry, who died in 2017, was a long-time member of both the Council on the Arts and Citizens for Peace. She was also a GVCA member artist whose sculptures were on displays at many member exhibits and in her own Apartment One show. Henry also volunteered countless hours to the history of the GVCA’s New Deal collection researching the Works Progress Administration artists.

She was also a longtime member of Genesee Valley Citizens for Peace and helped plan and attend many events to promote peaceful resolution to world conflicts. She especially enjoyed her annual appearance as Santa Claus at the “No War Toys” rally in Geneseo.

To honor Henry as a person and an artist, Citizens for Peace, in partnership with arts council, established the Paula Henry Peace Award in 2018.

This year’s award was presented May 7 at the opening of the member show.

“It was great to host an opening reception once again, and have artists and community members in attendance to view the exhibit,” said Bump. “Following all COVID-19 guidelines, we were able to hold a fun and safe gathering and look forward to more receptions and events throughout the year.”

The exhibit is on view through June 5. The theme of the exhibition is “Here Comes the Sun” and features the work of more than 40 local artists. Several different mediums are highlighted, including paintings, photography, fiber art, metal and wood work.

Many of the submitted pieces reflect the theme of the show.

WHAT: “Here Comes the Sun,” Genesee Valley Council on the Arts Members Exhibit.