Provided graphicTime to imbibe. A partnership between Livingston County and local craft beverage producers, the “Cheers to 200 Years” program runs from May through the end of November, with special beverage releases slated each month. 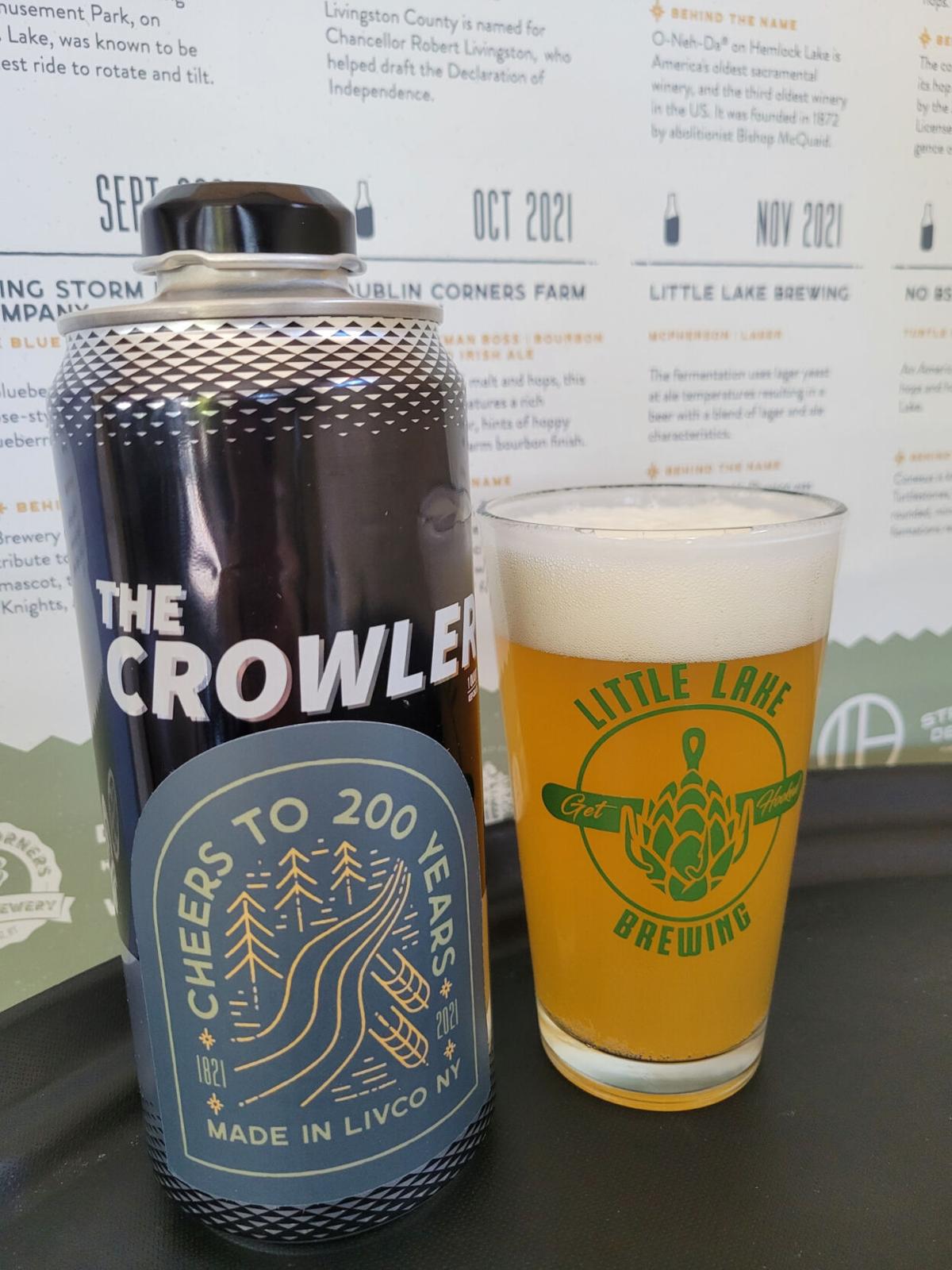 Provided photo Little Lake Brewing’s special release in November is the McPherson lager, which is fermented using lager yeast at ale temperatures resulting in a beer with a blend of lager and ale characteristics. 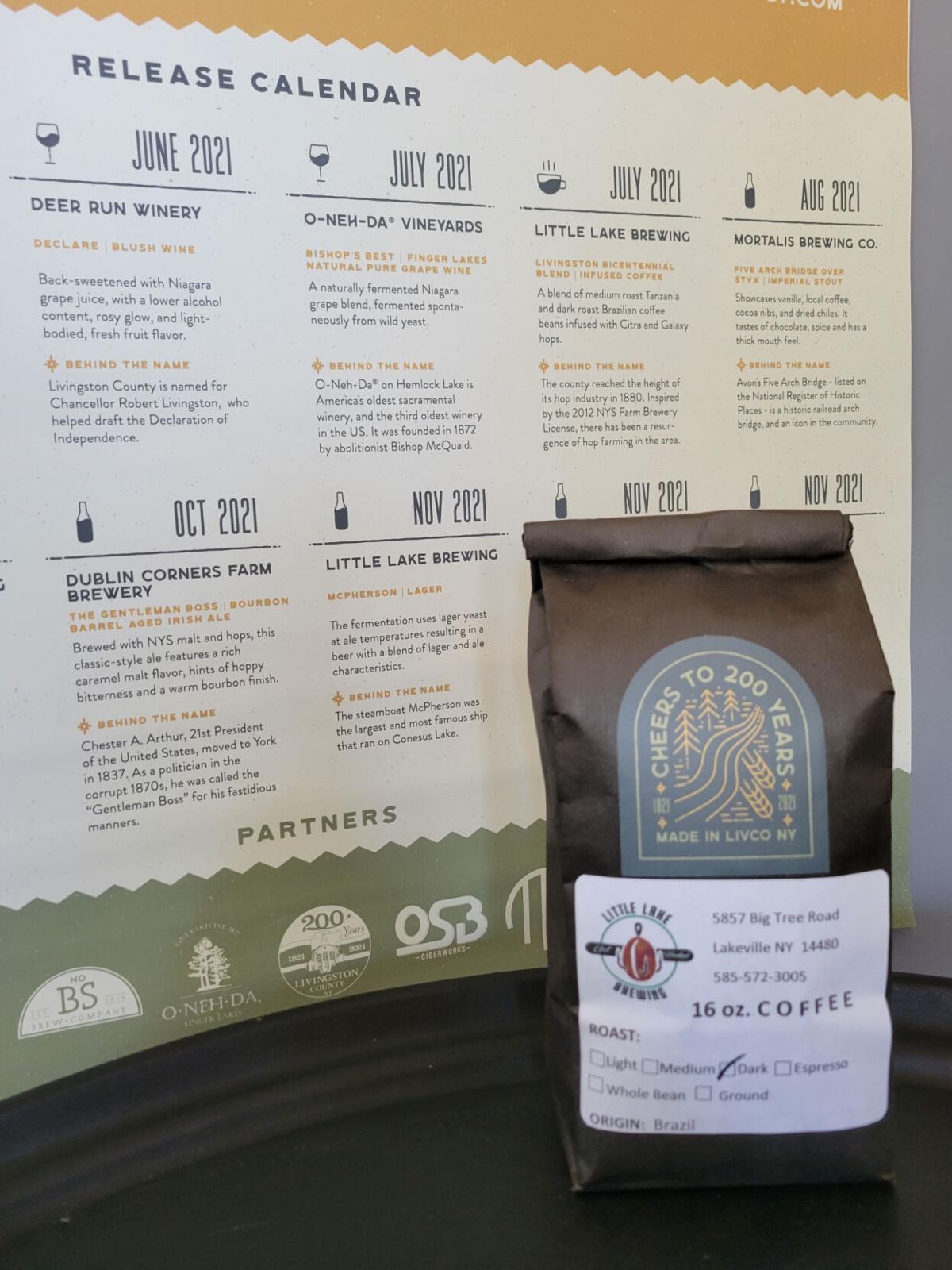 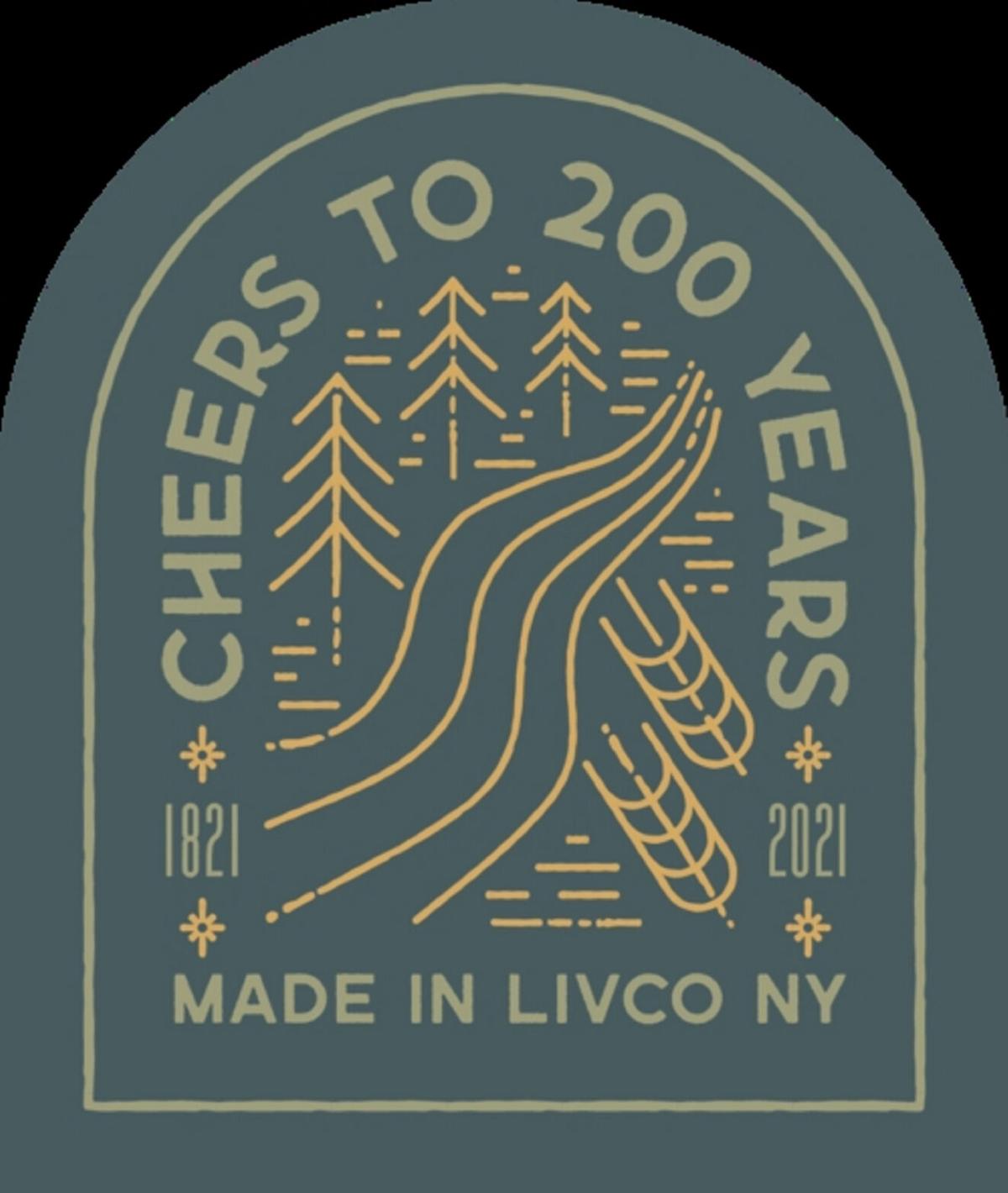 Provided graphicTime to imbibe. A partnership between Livingston County and local craft beverage producers, the “Cheers to 200 Years” program runs from May through the end of November, with special beverage releases slated each month.

Provided photo Little Lake Brewing’s special release in November is the McPherson lager, which is fermented using lager yeast at ale temperatures resulting in a beer with a blend of lager and ale characteristics.

A partnership between Livingston County and 10 local craft beverage producers will pay homage to the county’s 200 years of history and taste good doing it.

Staged as part of the county’s year-long bicentennial celebrations, the “Cheers to 200 Years” program runs from May through the end of November, with special beverage releases slated each month at different beverage producers from Avon to Dansville. Beverages include beer, wine, cider and coffee.

Melissa Hughes, director of tourism for the county’s economic development office, said she and her colleagues partnered with the Livingston County Historical Society and local craft beverage producers to develop the program.

“We encouraged each beverage producer to seek inspiration from the county’s history when coming up with their specialty beverage - through the name, ingredients, production method, or a combination thereof,” Hughes explained. “They took that idea and ran with it. We just made sure there were no double-ups.”

Hughes and her colleagues worked with a local design agency to create a logo and flesh out the feel of the program. The county’s economic development office handled the costs of printing posters, stickers and other merchandise and is helping promote the program, said Hughes, while the beverage producers are handling the creation of their special releases.

“The producers have been amazing - coming at this project with so much creativity and enthusiasm,” Hughes said.

For the most up to date information about upcoming beverage releases, follow “My Livingston Life” on Facebook and Instagram. More information on the “Cheers to 200 Years” program can also be found online at LivingstonLibationLoop.com.

Hughes is hopeful the staggered nature of the program will keep people coming back for more all year long.

“We hope locals and non-locals alike see this release calendar and treat it like a passport; that they come out to Livingston County and try every new release,” she said. “It’s a fantastic excuse to take a beautiful country drive, sample some incredible beverages and support small businesses.”

Below is a list of the special beverages and their connection to the history of Livingston County, organized by the month of their release.

n Battle Street Brewery, 4 Battle St., Dansville, is offering the Livingston Smash, a single malt, single hop pale ale. The beer owes its light color and body to the NY 2-row malt used in its production and its fruity flavor to the New York-grown Centennial hops. While the pale ale debuted at the beginning of May, Battle Street expects it to remain on tap through June and, perhaps, into July, depending on demand.

n OSB Ciderworks, 5901 Big Tree Rd., Lakeville, promises a white-knuckled ride with every sip of its Razzle Dazzle Berry Blast, a mixed berry cider that turns the fruitiness dial up to 11. The cider pulls its name from the earliest ride at the former Long Point Amusement Park on Conesus Lake, which was known for its rotational and tilting motion.

While the Razzle Dazzle debuted at the end of May, it will remain on sale through June while supplies last.

Its name is a nod to Robert Livingston, who was a member of the party of five who drafted the Declaration of Independence. Livingston also served as chancellor of New York - then the highest judicial position in the state – and administered the oath of office to President George Washington in New York City when it served as the nation’s capital.

“Bishop’s Best is a floral, grapey wine, perfect for a summer picnic or as a companion to spicy foods,” said Will Ouweleen, vintner at O-Neh-Da. “Fermented with only the wild indigenous yeast of the vineyard with no additions, it is a pure-grape example of Finger Lakes classic wines.”

The Niagara grapes used to craft Bishop’s Best have a rich history in the Finger Lakes region, said Ouweleen. Back when the vineyard was founded in 1872, it was one of the few native American grapes that could be cultivated locally.

“For many years, only Vitis labrusca grapes could be cultivated in the Finger Lakes due to a root louse that attacks the roots of all Vitis vinifera (aka European wine-bearing) grapes,” Ouweleen explained. “Grapes like Niagara that are featured in the Bishop’s Best blend were the only vines that were disease resistant to the root louse.”

While those constraints are now a thing of the past due to vintners’ ability to graft European grape vines onto native American root systems that are naturally resistant to the louse, Ouweleen said Bishop’s Best “pays homage to our past” with its use of Niagara grapes.

The Tanzania beans provide citrus notes while the Brazilian beans balance the acidity and lend richness to the brew. While hops are most often associated with the brewing of beer, they can be used in a variety of hot or cold beverages such as coffee, tea, and even carbonated water, said Robbin Carll, whose husband, Don, owns and operates Little Lake.

The use of hops in the coffee blend is a nod to Livingston County’s past as a prolific producer of the flower in the 1880s. The crop was grown in the towns of Nunda, West Sparta and Conesus. The town of Springwater also boasted at least two hop drying houses.

While hops served as a profitable crop through the 19th century, the industry gradually declined before coming to an end in the early 20th century due in part to a mildew blight that ravaged acreage across the state.

Locally however, the crop has been making a comeback, with the number of acres under cultivation increasing from 15 to more than 400 in recent years, according to Cornell Cooperative Extension.

n In keeping with its try anything style, Mortalis Brewing, 5660 Tec Drive, Avon, will release the Five Arch Bridge over Styx, an imperial stout that draws its names from both the Avon landmark and the river of Greek mythology. The stout showcases vanilla, local coffee, cocoa nibs and dried chiles. It tastes of chocolate and spice and boasts a think mouth feel.

n Deer Run Winery is back in September with Allegiant, a Port-style wine backed with Concord grapes. Allegiant brings a medium alcohol content, fresh fruit flavors and mild oak undertones. The wine owes its name to Francis Bellamy, the Mount Morris native who authored the words that would go on to become the Pledge of Allegiance of the United States.

n Rising Storm Brewing Company, 5750 South Lima Rd., Avon, is sure to pucker many a lip with its Blue Knight sour ale. A blueberry scone-inspired, Gose-style beer, Blue Knight makes use of sea salt and a mix of spices.

As SUNY Geneseo alumni, Rising Storm owners Jeff Riedl and Bill Blake looked to their alma mater’s mascot, Victor E. Knight, for naming inspiration while the beer’s blueberry scone element is a shout-out to all the small cafes and pastry shops that help keep main streets alive throughout the county.

Gose-style sours also have a component of salt in them to balance the sour – a tribute to the American Rock Salt mine in Mount Morris.

n Dublin Corners Farm Brewery, Livingston County’s first craft brewery at 1906 Main St., Linwood, will start the Halloween season off with The Gentleman Boss, a bourbon barrel-aged Irish ale. Brewed with New York-grown malt and hops, The Gentleman Boss features a rich, caramel malt flavor. Hints of hoppy bitterness and a warm bourbon finish imbued by the barrels round out this classic-style ale.

Since founding Dublin Corners in 2016, Heather and Justin Grant have turned to the town of York’s history for inspiration in naming their brews. This time was no different.

Chester A. Arthur, the 21st President of the United States, moved to York in 1837 and attended the Old Brick School there. His infant brother, George, is buried at Pleasant Valley Cemetery in York.

Chester Arthur was known as a gentleman – an interesting man with superb social skills and fastidious manners. Even as one of the top operatives in New York’s corrupt Republican political machine of the 1870s, Arthur was nicknamed the “Gentleman Boss.”

n Little Lake Brewing returns to the list with its second bicentennial offering, the McPherson lager. The beer is brewed using a natural cooling process. The fermentation uses lager yeast at ale temperatures resulting in a beer with a blend of lager and ale characteristics, said Carll.

The lager pulls its name from the famous steamboat of Conesus Lake that made daily stops at the Long Point dock to drop off park visitors and local cottage residents.

Named after Col. James A. McPherson, who built the steamboat in Lakeville in the early 1880s, it was the largest and most famous ship that ran on Conesus Lake. It had three decks that could hold 1,000 passengers, a dance floor, and a refreshment bar. The ship burned in 1902.

n Livonia’s No BS Brew Company, 3474 Bronson Hill Rd., will get in on the autumn action with its Turtle Stone honey brown, an American brown ale brewed with New York-grown hops and imbued with honey harvested from the Conesus Lake area.

Slated to open this summer at the old Geneseo Poorhouse at 4550 Millennium Drive, Strange Design’s Three Bricks IPA features a full, robust body and a bracing spicy character from the rye and generous use of Columbus hops.

The beer pulls its name from the grouping of large, brick structures off Millennium Drive in Geneseo that were built by Livingston County in the 19th Century to house the indigent and insane. One of the buildings will house Strange Design Brewing Company when it opens this summer.