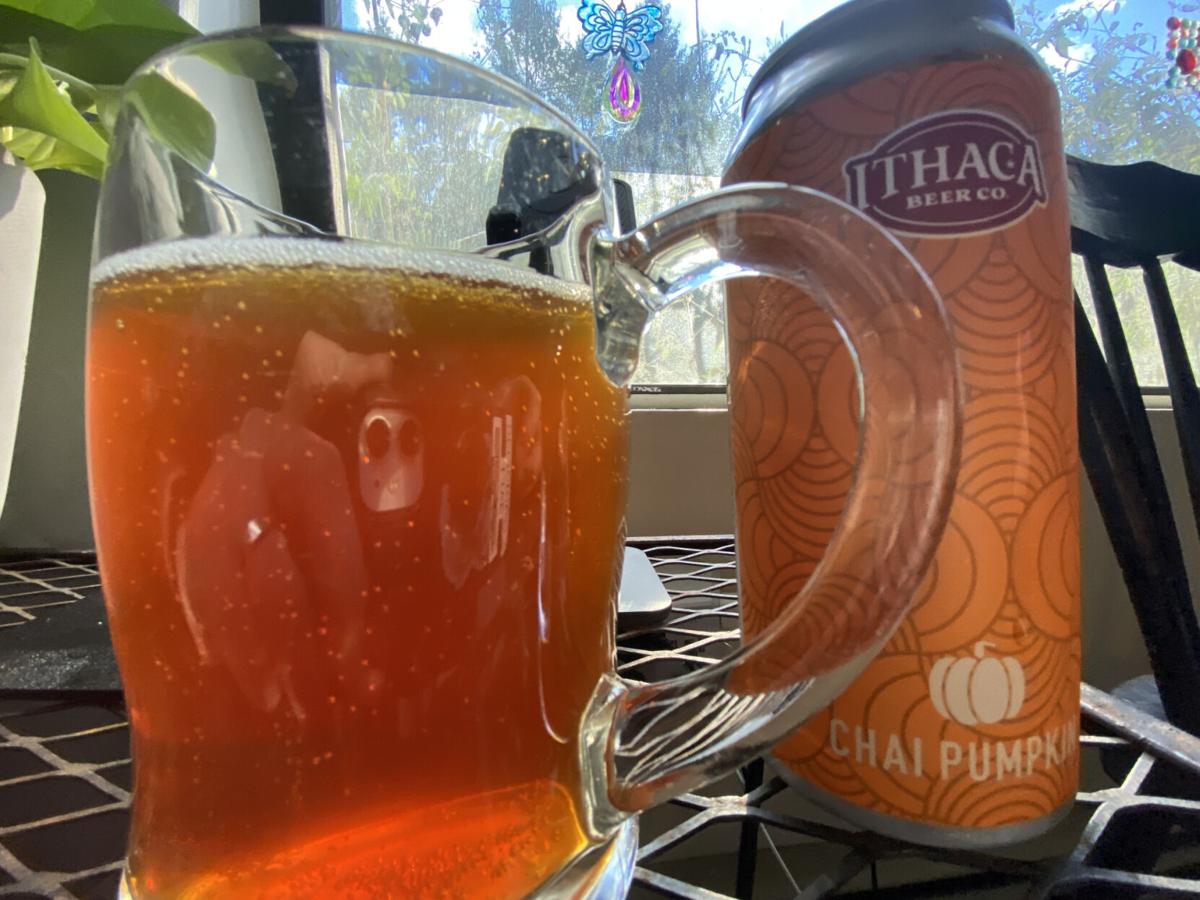 The lactose in Ithaca Beer Company’s Chai Pumpkin, cuts down on the acidity of the black tea, balancing out the pumpkin and creating a pumpkin beer that tastes, well, like beer. Dennis O’Brien/Watertown Daily Times 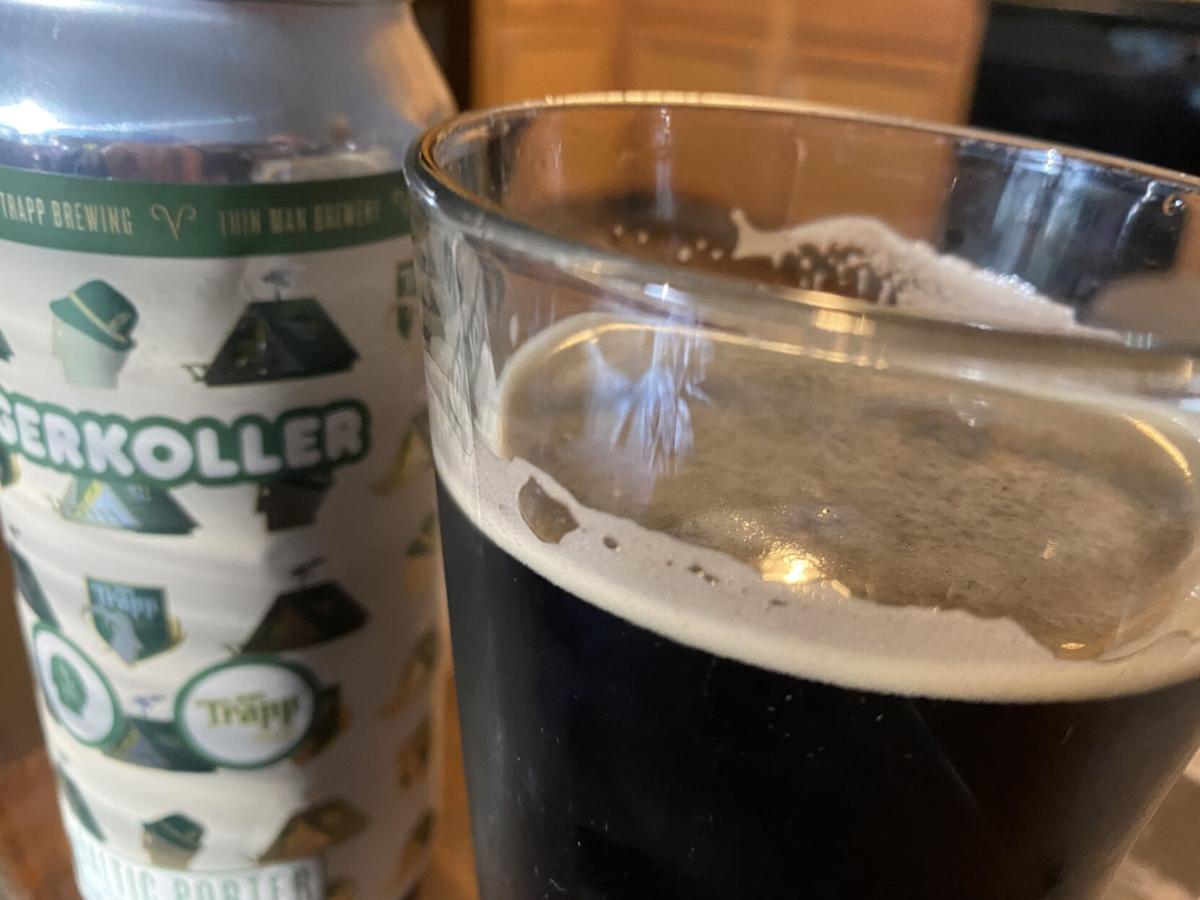 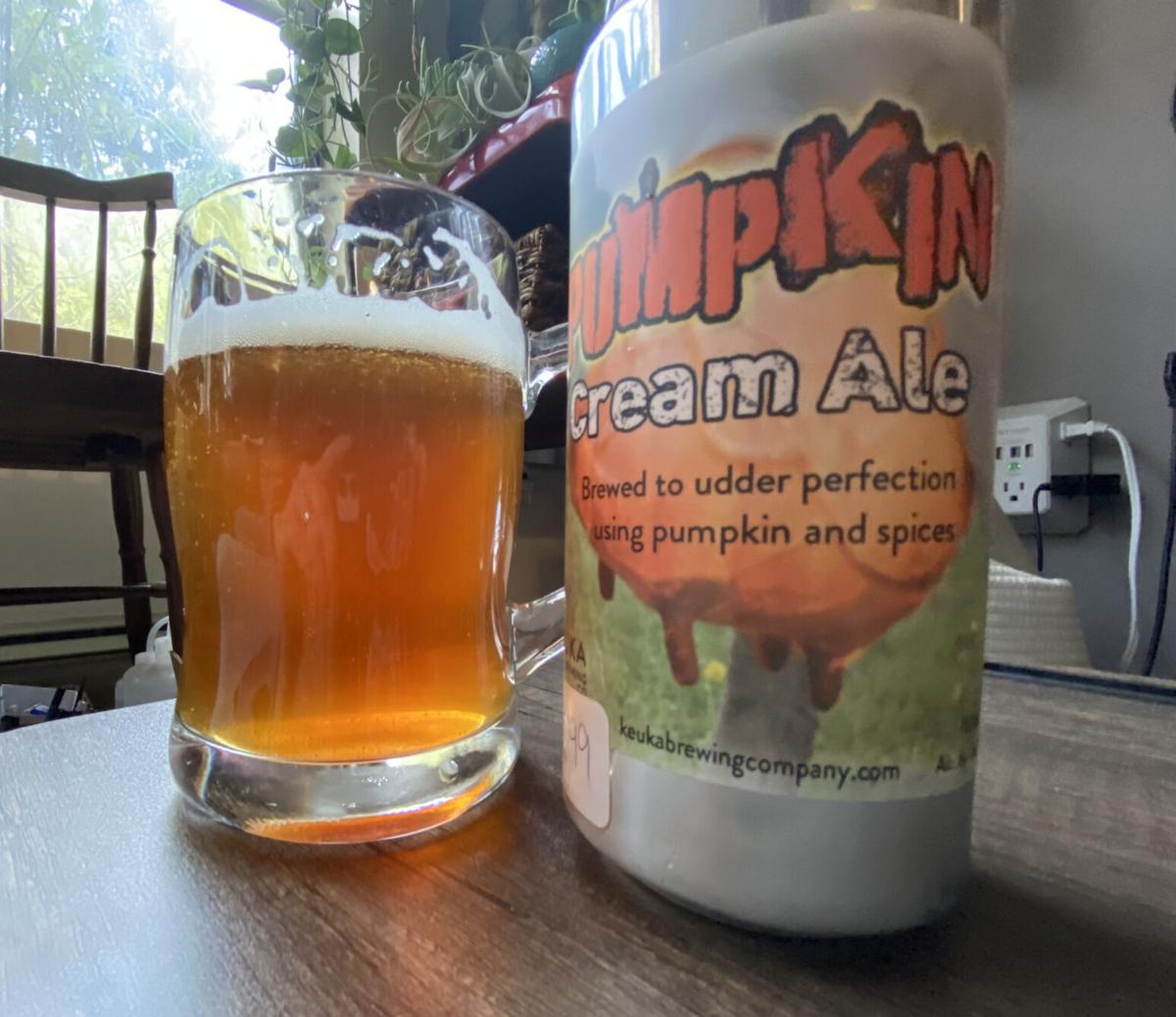 Keuka Brewing Company’s Pumpkin Cream Ale may not look like much from a packaging standpoint, but it’s a creamy delight. Dennis O’Brien/Watertown Daily Times 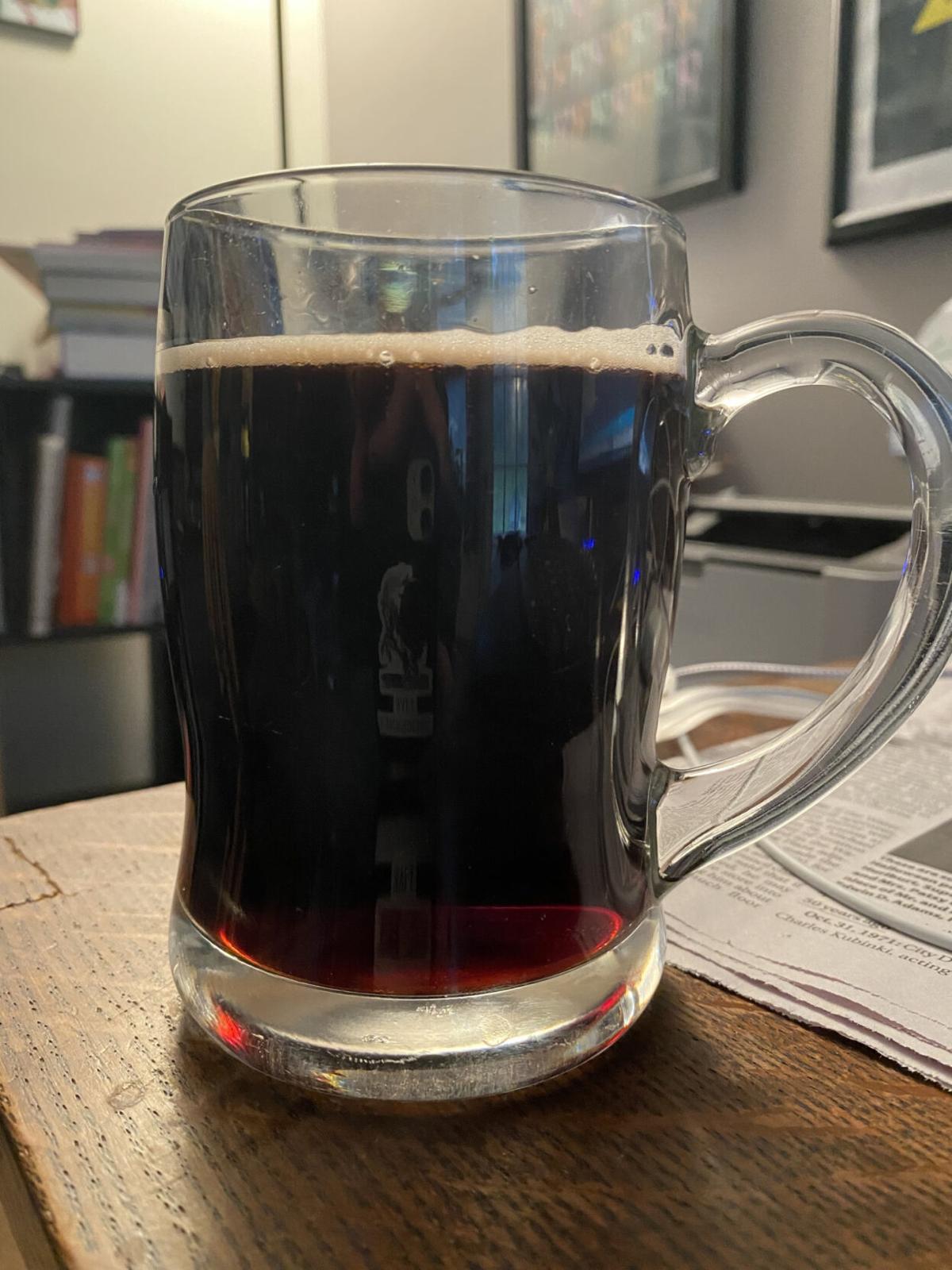 The lactose in Ithaca Beer Company’s Chai Pumpkin, cuts down on the acidity of the black tea, balancing out the pumpkin and creating a pumpkin beer that tastes, well, like beer. Dennis O’Brien/Watertown Daily Times

Keuka Brewing Company’s Pumpkin Cream Ale may not look like much from a packaging standpoint, but it’s a creamy delight. Dennis O’Brien/Watertown Daily Times

I’m standing in the damp cold, wearing a hockey mask and wielding a bloody machete ... and all I can think about is beer.

After COVID all but wiped out anything resembling a normal Halloween in the hellscape year of 2020, wife Christina and I were determined to (safely) take the boys door-to-door for trick-or-treating this year.

So with the sun slowly disappearing behind a sheet of dark clouds and under the path of a seemingly immense flock of crows patrolling the neighborhood near Thompson Park, we set out to plunder the neighbors, with sons John and Ben decked out as a dragon and an astronaut, respectively, Christina, in a form-fitting dress and a green wig either as a witch or as a girl I clearly would have hit on at the bar in my college days and me dressed as Jason Voorhees.

And it was kind of a blast.

Fine. It was way too cold, there were too many people milling around the streets for my still very COVID-paranoid nerves and I was disturbed by how many children in the neighborhood know who Jason Voorhees is. What are your kids watching, guys?

But it’s a rite of fall, and the kids set themselves up nicely for a fairly unhealthy amount of sugar over the coming weeks. People largely respected personal space and neither the menacing clouds nor the menacing murder of crows flying overhead triggered any kind of horrid storms.

And a trip to seemingly every door brought a weird mix of fistfuls of sweets. Milky Ways mixed with Skittles. Candy corn (blech!) and tiny 100 Grand bars. A kid’s Halloween pail seems, at the end of the night, to be a disordered grab bag of disparate flavors, sweet, savory and, in the case of candy corn, sidewalk tinged with a hint of Elmer’s Glue.

So in the aftermath of all of that pillaging, while the kids gorged themselves on sweets and Christina and I ordered Thai food and drank too much wine, I started to think about how to build the perfect holiday six-pack as Thanksgiving approaches.

Traditionally, I think, if you go to visit family or friends for the holiday, you might bring a bottle of wine for dinner or, if you’re like me, maybe a bottle of whiskey for after dinner.

But what about beer?

Like any bucket of sweets left out amid the skeletons and kicked-over garden tombstones, I think it’s more hospitable to show up with a variety of flavors, rather than just clutching a six straight off the shelf. But what flavors do you start with?

Well this time of year, I like to lean in hard on the dark and decadent. We’re coming up hard on two weird, lost years since the first cases of COVID-19 began to emerge in Wuhan, China. Even with vaccines and the waning of the latest wave of the disease, if ever there was a holiday season that called for decadence, I think we’ve collectively earned it.

So we’re going to stay away from the lighter stuff and stick with darker, stick-to-your-ribs kind of stuff. Afterall, if you’re already planning to top off three servings of turkey with some pumpkin pie, I don’t think you’re looking for a light pils to wash it all down.

1. Lagerkoller (Thin Man Brewery, Buffalo) — This Baltic Porter, a collaboration with the great Von Trapp Brewing Co. in Stowe, Vt., is one of my absolute favorites this year. Named for the German word for Cabin Fever (appropriate enough this year and last), the malty notes of roasted coffee overpower any sweet caramel flavors. It’s almost smoky, just a silky, smooth 8% that’s hearty without feeling like a meal replacement.

2. Pumpkin Cream Ale (Keuka Brewing Company, Hammondsport) — I found this bad boy in the mixed six Tinder Door at Bottlecaps on Arsenal Street in Watertown, and it doesn’t make a big impression when it comes to packaging. A sterile aluminum can with a cheap-looking label that features what might be a cow or a pumpkin or ... possibly both. But boy does this thing make an impression once you pop it open. The Cream Ale has a nice amber color and a foamy pour in the glass. It’s brewed with lactose (which might account for why they bill it as brewed to “udder perfection”), which really does lend a creamy flavor to those rich pumpkin notes. So while you get those strong, spicy flavors. It’s a beer that’s light enough to serve with a meal at only 6% but could easily serve as a desserty digestif.

3. Chai Pumpkin (Ithaca Beer Company, Ithaca) — Again we go with a pumpkin beer, and again one that bucks tradition. Rich with Biscuit, Munich and Vienna malts, among others, and brewed with plenty of real pumpkin, this starts with a base that’s similar to Ithaca’s Country Pumpkin. But they double down on some of the traditional nutmeg and cloves by adding essence of black tea and a touch of lactose to try to balance out the harsher, acidy flavors of the tea. There’s something rich and hearty about those notes of tea, and it helps to kind of bring out the flavor of the malts. The result is a strong, 8% pumpkin beer that tastes, well a bit more like beer. That’s never a bad thing.

4. Ok2berfest (Two Roads Brewing Company, Stratford, Conn.) — I write a lot about the burlier stuff this time of year. One of the joys of the fall, right up there with even the briefest of Yankees postseasons, is watching the shelves at local bottle shops fill out with pumpkins and stouts and porters. But you don’t want to overlook the scores of traditional Märzen beers that also pop up this time of year. Yes, Oktoberfest was again canceled in Germany over COVID concerns, along with plenty of themed events both at home and abroad. But that doesn’t mean we can’t enjoy the malty, full-bodied lagers that German winters made famous. I could have name-checked dozens of really good American and German options here, but I wanted to give Two Roads a bit of a shoutout. From their Roadsmary’s Baby to their blissful Holiday Ale, these guys consistently hit it out of the park this time of year. A good Märzen, and this is a good one, is a lighter but not too light taste that should be a staple for any holiday table.

5. PB&J With Churchill Oatmeal Coffee Stout (War Horse Brewing Company, Geneva) — OK, that’s a bit of a lengthy name, and this is a lot of beer to take in. I’ve been touting my guys in Geneva for longer than I’ve had this column, and I’ve long considered War Horse to be one of the best breweries in this state. But this might be one of their most impressive, and outright delicious, creations. War Horse has taken their lovely Churchill Oatmeal Stout and turned it into an entire oddball meal. Brewed with fresh roasted coffee, raspberries and peanut flour (note that ingredient in case you have family members with allergies), War Horse somehow manages to brew this dark, sweet dessert beer masterpiece while clocking in at only 7.5% ABV. So it’s really sweet, but it won’t cause you to tap out before a slice of post-meal pumpkin pie. I’m not a big dessert beer guy, usually. And I like my sweets cut hard with plenty of bitter, boozy goodness. But I swear this oddball brew might make me a convert.

6. Maximator (Augustiner-Bräu München, Munich) — This last recommendation comes as a bit of a homework assignment because as near as I can tell, you can’t buy this anywhere inside of a three hour drive. I went on a road trip recently with a relative I won’t name who’s going through a rough time. We wound up at the bar where I spent far too many nights during my college years, Flood’s, in Stroudsburg, Pa. If you’ve never been to Stroudsburg, you’re not missing a whole lot. But I lived in the Poconos for more than 10 years, including college, and one of the few things that ever brings me back to the Burg is Flood’s. The food is pretty good but not outstanding, and the bathrooms are sketchy at best even on a good night. And while the bar is no longer filled with plumes of cigarette smoke, and I’m married to the girl in green hair rather than having her turn down my offer to buy her a drink, the one thing that hasn’t changed in 20 years is that Flood’s has an almost peerless beer selection for that region. So in between endless pints of Yeungling Lager on dollar draft nights, you could lose yourself filling out their placemat checklist, which features everything from local microbrews to some of the best that Germany, France and even Iceland have to offer.

And when confronted with this long list, I almost instinctively went for something I couldn’t pronounce. Already a beer or two in, I stumbled my way through Augustiner and didn’t even bother to ask for a description, thinking I was going to get some pleasant, light German lager. Instead what confronted me was a glass that resembled a brandy snifter and a dark, ruby red pour. This doppelbock is a rich, malty brew that tastes a lot stronger than its 7.5% ABV, without the kind of plummy notes you might find in the monk beer set. It’s dessert without the guilt.

I can’t possibly recommend this beer enough. I just can’t also recommend a nearby place to purchase it. According to Beermenus.com, the “nearest” place to get ahold of one of these bad boys is all the way down in Westchester County. But if you can find it, please let me know. I’ll buy the beer for both of us, and we’ll tip a few back.